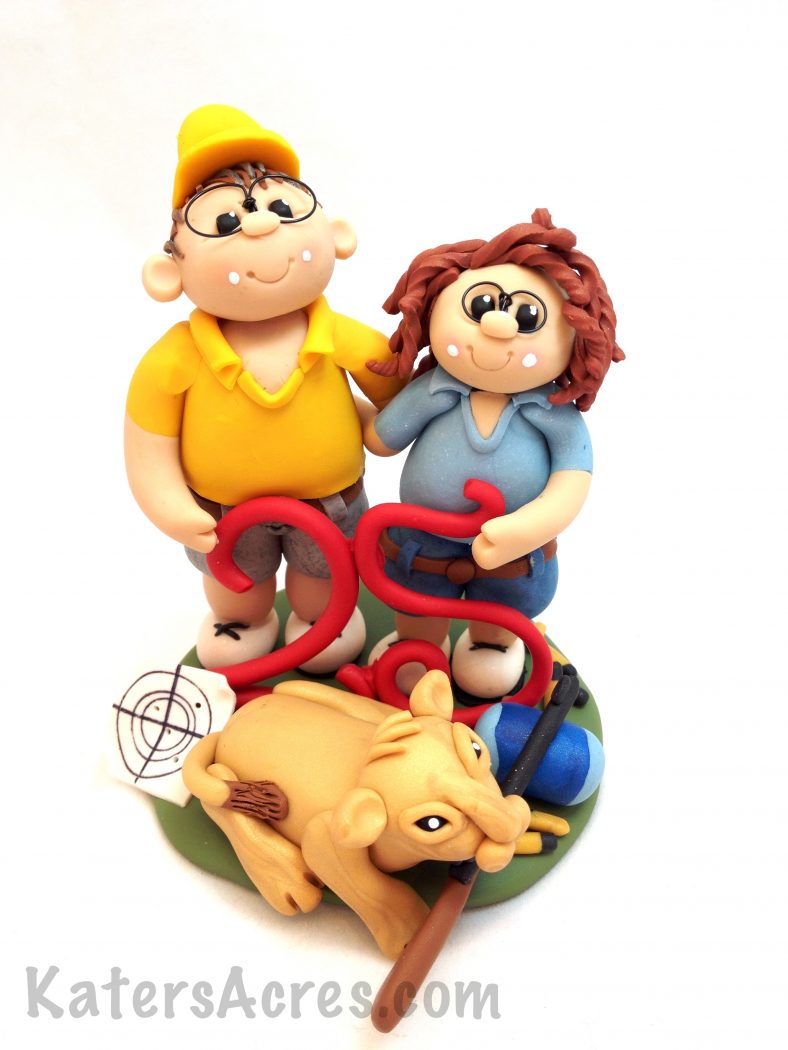 Making a cake topper is a lot of fun. I recently made a cake topper for my one of my girlfriend’s parents. They were celebrating a magnificent accomplishment; 25 years working as coaches for the local rifle team. So, my friend issued me a challenge to have me design and make a custom cake topper in their honor for their backyard summer celebration. I thought I would take a moment today to show you the me making a cake topper (in photos of course) so you could see how it was built step by step, piece by piece. If you would like to see more “in process” photos of my work on the blog, let me know!

Are you ready? Let’s go behind the scenes in my NW Pennsylvania studio…

Go ‘Behind the Scenes’ with me and see the making of a custom ordered cake topper! http://t.co/33aEsrlvju Don’t miss the awesome cake either

As with all of my pieces, I make the base first and add my signature and stamp logos. For this piece I knew that there would be 3 main figures: a man, woman, and cougar (mountain lion) so I made my base a proportionate size. I started with the tallest of the two people, the man, and built him from the legs up. I then built his wife in the same fashion and placed her a little in front of him so he could place his arm around her. I wanted to make them both with their arms around each other, so after I added some of the other pieces I reposed the pieces as you see them here.  These two people took me approximately 6 hours to make.

You can see from the photo at the right that as of this point I have repositioned my figures arms into a pleasing “arm around my love” hug pose. These two love each other so much that I couldn’t possibly make them not hugging! From there I added the “25” which I also wanted to be prominent in the topper. To get this to not slouch, I prebaked it for 15 minutes to harden it so that it would bend or distort. I then added it to the piece.

Then, I added a cougar (which I was told looked more like Simba), oh well! I also added a roll and rifle at this point.  The finishing touches were the tiny shell casings and the target that sat behind the cougar. Time time to finish this section was about 5 hours. Then I sat and played with the positioning of the cougar (I wanted him crouching, but then he was too big for the people). I tried about 10 different positions and finally didn’t like anything better than his original pose (shown at right). All in all, this piece took about 12 hours from start to finish, not including bake time.

Are you ready to see what it looked like on the cake? My friend Jennifer from “A Flexible Life” blog made the cake that this topper sat on. She made homemade fondant and everything! I’m not a good baker, but I’m a good cook. But believe me when I tell you that this cake was sooooo (notice the multiple “o’s” for effect) yummy and good. WOW! I almost had 2 pieces, but I was so full I thought I might pop…so I refrained and let my hubby have a 2nd slice of cake.

7 thoughts on “Behind the Scenes: Making a Cake Topper”