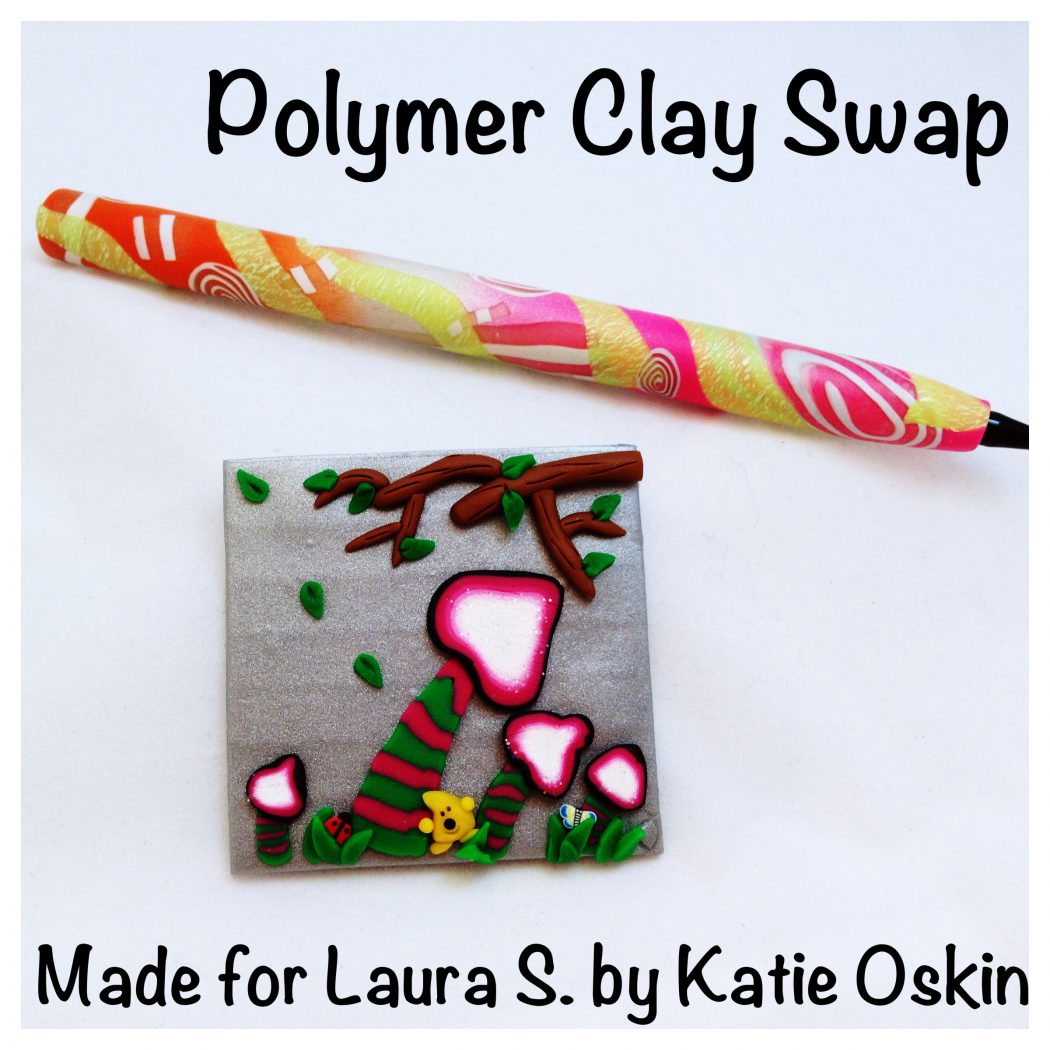 Last year in the fall, I was invited to join in with a group on International Polymer Clay Artists from around the world in a swap.  I considered myself very fortunate to be part of the group where Tina Holden is one of the leaders.  We have just completed our most recent swap and I wanted to show off what I received…

Each swap is united and organized around a theme.  This past theme was “Pens & Twinchies.”  Our job was once we were paired with out partners, we were to make and ship a handmade polymer clay pen and a “twinchie” (which is like an inchie, but it is two inches instead of one inch).  I had oodles of ideas and oodles of color palettes in mind … why? Because in part I am addicted to making polymer clay pens anyway, I make at least 2 a week in my studio.  (You can find a video tutorial on making polymer clay pens here).

I was partnered up with the very talented Laura Schiller.  I actually made several different items for the swap because honestly … I just couldn’t decide what I was “happiest” with.  Though, in retrospect, any of the items I made would have been good sends.  After spending several days making different pens, I finally settled on this lovely pen shown at left.  I made a blended sheet of gradient metallic orange, pearl, & metallic pink and covered it with striped & bullseye white canes for pop and yellow translucent clay with gold foil.

But perhaps my favorite was the Twinchie.  I made several Twinchies all of which were cute … but then I had a great idea.  I needed to make a set of Twinchies!  So, I made four Twinchies using mostly simple canes to look like mushrooms … and then I made tiny (about 1/4″ tall) Parker’s to go into each and every scene.  You can see all four of the Twinchies at the right …

I receive the most beautiful caned pen & Twinchie from my swap partner, Laura Schiller.  Laura is a very accomplished cane artist, as well as egg decorator.  Her swirls and canes were perfect and her leaves added a final touch of whimsy and grace.  The back of the Twinchie features a beautiful Irish blessing.  She even handmade a little wire frame for the Twinchie to allow it to stand.  I was so flattered and honored when I received by swap.  Thank you so much Laura!

Would you like to join in this International Polymer Clay Swaps team?  If so, just click here or on the banner above to be taken to the FaceBook group page.