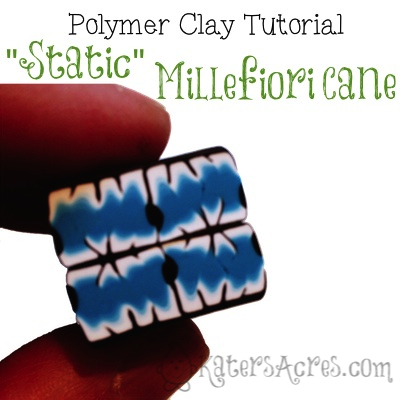 Why yes, it has been a very long time since I did a 52 Weeks of Canes post, hasn’t it? First I should probably take a minute to tell you why. If you have followed my art for any length of time, you already know that the majority of my work is sculptural in nature. This being said, we spent all of last month making rose canes for the 52 Weekly Cane Projects. Here’s the problem, I will never use that many roses … and I’m stingy with my clay.  This being said, I made 1 cane for the group in the past 4 weeks because I just didn’t need them. My ultimate goal in joining this team was that I overcome my fear of caning. Which, I can honestly & proudly say, I am not longer afraid and I venture to try any cane (that I have a tutorial for that is).

Almost every week we have 2 different canes, I usually only do one cane. The reason for this is two-fold … the first reason is as I described above. The second reason is due to my own time constraints … I don’t have enough of it to make both canes. So I generally choose the one that I am most likely to use. This being said, this week I chose the Static Cane. (The second tutorial was for the Vermicelli Cane.)

Mini-Tutorial for My Static Cane

I ran out of white polymer clay this week and haven’t been able to get to the store to buy new, this being said, I had to use what I had available. What I had available was a leftover “hunk” of a Skinner blend cane … so that made the base for this static cane.

Deviation Is Important as an Artist

Let’s remember that when you work with clay it is your project.  This means that it does not have to be identical to the tutorial. Remember that tutorials are guides only. They are not the last written word. You can make something any way you want to make it, it is your project and your clay … as long as you are having fun, bending the rules to suit you, and learning at the same time … anything goes.

As you can tell when you compare the instructional tutorial for the Static Cane and this cane, you will see differences. The first is their “spokes” are at least triple the amount that mine are & theirs has white in the middle. I intend to use this as a border cane and did not want the “static” to be that close together. Additionally, I kaleidoscoped by pattern … why? Because I like that look and thought it would make a nicer border.
[hr /]

Gallery contains LINKS for tutorials here on my site as well as across the web.

Do you want to join us? Come and join the fun at this FaceBook group where we create one cane a week for the entire 2014 year!