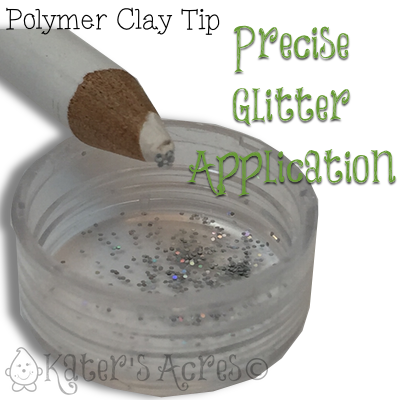 Place Glitter Exactly Where You Want It

There’s an awesome little wax pencil that gets a lot of use in my studio. If you’ve ever worked with little gems and especially flat backed beads, you’ll be familiar with this VERY inexpensive tool. It’s called a Wax Pick-Up Pencil and you can buy them right here!

The other day while sculpting I was reflecting on the movie, Jurassic World. Many of you know that I have a “thing” for dinosaurs. I was fondly remembering the uniqueness of Blue (the velociraptor) and that special blue stripe that tells him apart from his other raptor buddies. Well – I too wanted my new creation, a shark in honor of shark week (get the tutorial here), to have a stripe, but a glitter stripe. How in the WORLD was I going to do this? If I used my finger the glitter would end up in places I didn’t want it to go. Well, the answer was sitting right in front of me the whole time … my wax pencil.

So, as a curious mind always seeks new perspectives … would this work? I’ve never seen anyone else mention this … hmm…..

I put some glitter in the top of my glitter jar and pressed that little wax pencil into the glitter … do you know what happened? Shrapnel, what I named my shark, had a perfect glitter stripe from his nose, all the way down his back. By placing the tip of the wax pencil in the lid of the glitter jar, it picked up just a few pieces of glitter, but I could place them exactly where I wanted them without getting glitter all over my shark. The effect was exactly what I was going for! Hurray!

Let me know how this works for you! I found it works with ultra-fine, micro, & fine glitter just great.