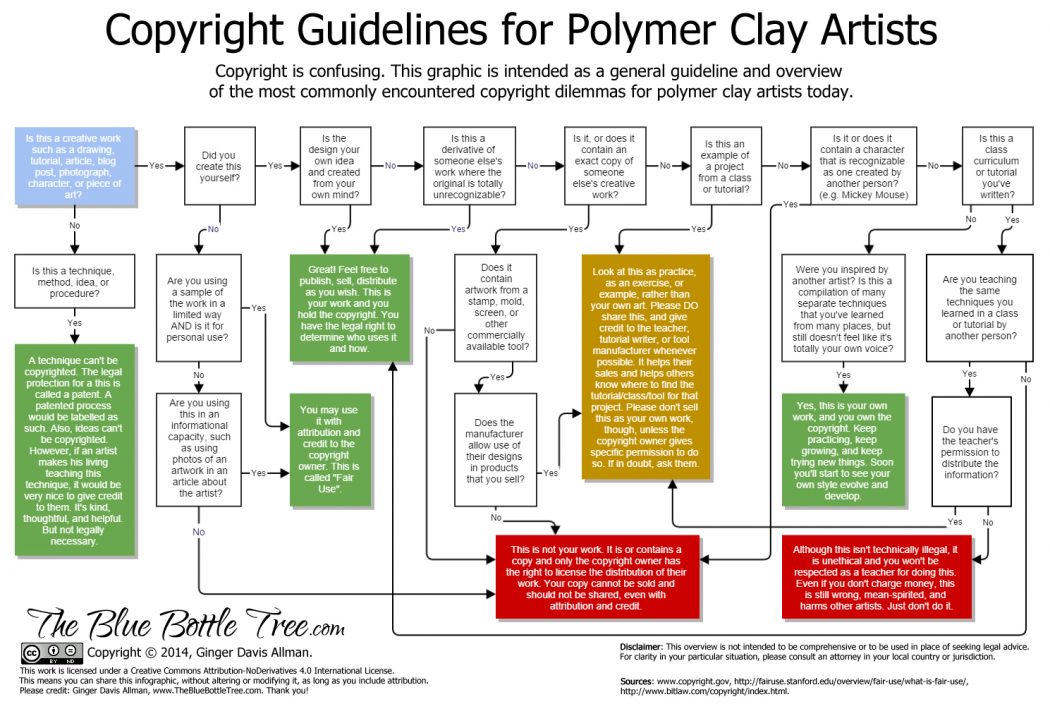 Where’s the Line Between Inspired and Yours?

The issue of copyright is a huge issue globally for artists of any medium. Lately it’s been quite the buzz in the polymer clay community as well. One of my dear polymer friends, Ginger Davis Allman of The Blue Bottle Tree made a very gutsy move, put herself out there, and tried to tackle the issue head on. You can read her article here. I applaud her & support her. And in case you missed the end of the article, I agree with her 110%!

Artist’s come in all shapes and sizes and we’re all inspired by someone, something, or some likeness. Knowing the different between ‘inspired by,’ ‘original,’ and a flat out ‘copy’ are very important.

GET THE ARTICLE NOW

LEARN THE BASICS & GET THE GUIDELINES:

If all of a sudden you have become scared or worried about making something from a tutorial, posting results from another’s tutorial, or posting your work because it may have been influenced (whether knowingly or not) by another artist, you need to read this article from Ginger & print this graphic for reference! Hang the graphic in your studio just to remind yourself whether or not you are crossing the line.

THERE WILL ALWAYS BE THOSE WHO DISAGREE:

One of the reasons that I so heavily applaud Ginger for tackling this issue is because it IS a hot button issue and one that she likely will come cross-grain with many on account of her publication to her blog.

All throughout 2013, Christi Friesen & I dealt with the issue of copyright and oodles of people trying to tell me that I was wrong for doing it. It went so far as to me being “outed” by someone because I was reteaching Christi’s tutorials from her books. After much ruckus & hoopla … I was apologized to. Why?

Why was this okay and NOT against copyright? Truly, there is ONLY one reason: Because Christi & I were doing this together. She was 100% aware of what was going on. In addition I had her expressed permission to do so. She even joined in on the fun giving away a full set of books & other goodies for the project. In Spring 2014, both Christi & I were acknowledged in The Polymer Arts for the project & it’s success. My little “Gus” even had his moment in the spotlight. The project was such a success that this coming year I partnered with Lisa Pavelka for a similar project, The Pavelka Project.

Join Me & Lisa Pavelka in 2015 for The Pavelka Project

Part of that issue is one that comes from people’s techniques & tutorials. So what is a technique? A technique is what you do with the clay: how you manipulate it, blend it, smoosh it, form it, carve it, etc. A tutorial is the teaching of how you do your technique. This tutorial can be a video, PDF, or live class.

Here’s my feeling: If you took the time to develop a technique and never want people to copy it … don’t teach it, don’t sell it, don’t put in print how you do it, and do NOT post pictures of your finished work. Inevitably, someone will look at your work, technique, photo of your design, or tutorial and use it to inspire (or flat out copy) their own designs. Let’s face it, when you’ve developed something awesome … you WANT to show it off. And if other’s think it’s awesome too … well … they’re going to figure out how to do it eventually. Consider it the biggest form of flattery you can have.

Remember that the second your technique or tutorial hits publication (by yourself or someone else) you no longer own it … but be careful because as Ginger eloquently states, you can’t copyright a technique. That is a process that is extremely different and it’s called a patent. Many tutorials that you see online do not come with permission to sell what you make from using their tutorial. So before you buy … check! If it doesn’t say, then you would be wise to check with the tutorial seller first to be 100% sure you can sell what you make using their tutorials.

**ALL KATER’S ACRES TUTORIALS COME WITH THE EXPRESSED PERMISSION TO MAKE & SELL ANYTHING YOU DEVELOP FROM MY TUTORIALS.**

Here’s the biggest problem with polymer clay … character abuse. One hit on YouTube will take you to no less than 20 different variations of how to make Walt Disney’s “Olaf” from polymer clay. But did you catch that, it’s Walt Disney’s Olaf … it’s not YOUR Olaf and it certainly is NOT your Olaf to teach how to make. The same is true for Mickey Mouse, Angry Birds, Ninja Turtles and so many others.

These character are owned & licensed by their company. Period. You do not own them. It IS copyright infringement to reteach, sell, or create these characters that even appear like the originals.

Let’s be honest, Mickey Mouse and all his friends are easy for any character sculptor to make. They are basic & simple shapes. The same is true for Parker & Lolly, neither are hard to make. But just because something isn’t hard to make does NOT mean that you can copy them. In fact, for both Parker & Lolly I went to the greatest lengths to protect them; the same has been done for Mickey Mouse, Ninja Turtles, Angry Birds, Toothless the dragon & thousands of others. Years ago, I applied for my US Copyright through the Copyright office and was granted it for both Parker & Lolly. Today, they are no different than Mickey Mouse. Just as Mickey belongs to the Walt Disney Company, Parker belongs to me.

If you want to recreate a licensed character, make or sell a tutorial of them, you must first obtain a license allowing it from the copyright owner. Disney is very exclusive who can have rights to their characters. There’s a reason that when you buy Mickey Mouse or Disney Princess fabric it’s in the “licensed fabric” section and costs much more than your basic fabric. It’s because the manufacturer obtained a license from the owner (at a VERY hefty price tag) to make the fabric with Disney images, & well it with the Disney name. The same must be done with Harry Potter, Hunger Games, & thousands of others. For me, if someone wants to recreate Parker, they can apply for a license (through me) to use him in their work, remake him, or teach others how to make him. As of today, I have extended a license to one person who creates fabric recreations of Parker that are sold ONLY through my Etsy store.

YES! Copyright rules DO apply to Pinterest too (as well as every other form of social media)! Read this article here for more information on it. Pinterest has the HIGHEST abuse rate in social media when it comes to copyright. The copyright issue is a BIG one, but it’s one that we must talk about.

4 thoughts on “The BIG Issue of Copyright”