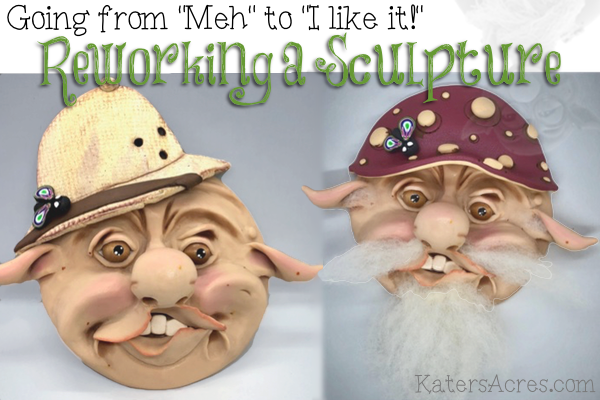 Reworking a sculpture is always a hard decision. What happens when you put time, energy and effort into a piece and you’re not satisfied? I admit that it does happen to me and it probably happens to you too. So what do you do? Do you just leave the piece as it is and decide the piece is a failure or worse yet, that you are a failure? Do you decide to throw it away? Or do you decide to overhaul it? In all truth it can be any of the above and sometimes a variation of the three. Here’s the story about Mr. Mushie d’Room and hopefully it will inspire you to reconsider something in your studio too.

I love making faces, and more importantly, I love making faces to hang on my door and even sometimes turn them into door knockers. This face started out innocently enough [you can even watch part of it’s evolution in a FaceBook video] just as any other. Moreover like my others, I don’t know what they will “become” until they tell me. And yes, that is a thing … my creations often tell me what they want to become.

Reworking the Sculpture: The Case of the Doofus Face

I started as I always do, making a finished face. The face was a bit goofy looking (more derpy and goofy looking than normal) and I loved that about him. This one was different and more unique than some of my other faces. I had worked on him for several weeks. It had been a slow process and I had changed his expression multiple times until I was satisfied. Some things about him I had kept over the course of his sculpting: always a big nose and “rubbery” looking lips as those two features made this face very different from my usual. His ears had been redone so many times I couldn’t even count. But after several weeks, off to the oven he went.

Once the face was finished, it was time to make him into something. Faces can’t be kept just as faces (in my opinion) they have to do something, become something, evolve into something. So, ever so slowly he needed to become something, so I made him a hat, because he needed a hat, as most of my door creations do. So I decided on a pith hat. He’s a derpy looking guy that looks like he should be exploring the jungle. Yes! So I made him a pith hat and offset it so it wasn’t straight on his head and also made the hat itself at an angle so the hat wasn’t as though you were looking straight on. I also added a bug for a cute little affect. Once his hat was finished and all was said and done… I didn’t love him. In fact the more I look at him, I didn’t even LIKE him. There was something just off about him. He wasn’t particularly bad. But his hat was wrong, it was too tall. His face didn’t fit the hat and the more I looked at it the more I didn’t like it. So … I did the only thing I could do. I decided it was time to dig in and begin reworking a sculpture I didn’t like.

Making the Hard Decision on What to Do

Reworking a sculpture that is completed is a difficult decision. Because once you make that decision you risk a lot. I used Bake and Bond to adhere that hat and it was on there to stay. Removing it (even if I warmed it in the oven, which I did) would mean parts of my face would break and I would have to cover those breaks with the next hat or addition. But here’s the way I figured it. I didn’t like this face enough that I would never put it on my front door and I would certainly never sell it. So … if it completely was destroyed the only loss was my time, a measly amount of clay, and I would learn a few lessons along the way. So … I began the horrifying process of deconstructing my Jungle Doofus. And here’s what happened …

Not only did a huge piece of his head break off, but I busted off an entire ear that his pith hat was sitting on. I learned a couple of things. 1) I do construct things really well so that when I bake in multiple stages and pieces things will never come apart (go me). 2) I will survive when I break them. But here’s the thing, when I set out to redo this adorable face I needed to capture the essence of this face which was delight, joy, quirk, and laughter. So after breaking the face, the first step was just to repair the parts of the face that I could, so I did. [I apologize that I took no pictures of these steps.] Then I walked away and I thought for a few days as I didn’t want to further damage and destroy this face. With such damage done to his head, I knew whatever I did I would have to cover a large portion of his head where the damage was done, that although repaired, I could never make it look as good as it was in its new condition. As I worked on my face I thought of my ‘Schrumes and how quirky and funny they are and thought a spin off in a “Mushroom” may be cute and I set to work. Even at that, Mr. Mushie d’Room went through several mustache and beard evolutions before I settled on what you see in the photo at right. And naturally the ear hair is included because what good old man doesn’t have a little bit of ear hair? But in reality the ear hair helps to cover the fracture that was caused during breaking off of his ear, that though repaired can still slightly be seen.

Pros & Cons of Reworking a Sculpture

Photographic Evolution of the Doofus Face