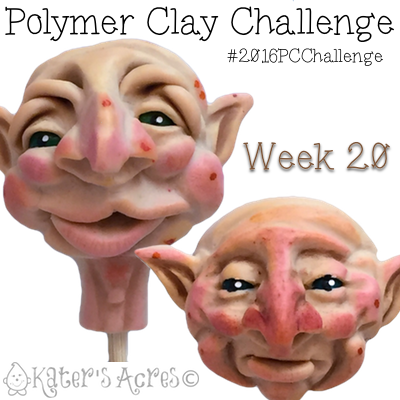 REGROUPING: Sometimes it’s hard to face the truth … I’ve known the truth for about 2 months now … but facing that truth has been a different story. So what “truth” am I talking about? I’m talking about satisfaction with polymer clay. Many of us can honestly say that we are satisfied with what we are doing with clay. Not all of us like or are drawn to the same aspects of claying. Some polymer clay artists prefer caning like Wendy Jorre de St Jorre, vessels like Donna Greenburg, quirky creatures like Lisa Renner, pods like Doreen Kassel, jewelry like Lisa Pavelka, that fun organic feel like Christi Friesen, or sculpting like me! But when your soul aches from a kind of lethargy (let’s call it like it is … boredom) … it’s time to move on.

There was a reason I started the Polymer Clay Challenge … it was to grow my own skill. The first year I did it (in 2014), it was not a community endeavor, rather it was something I was doing on my own. I wanted to learn how to make canes and no longer be terrified of them. So … 2014 became: the year of the cane.

Last year with the retirement of Parker’s StoryBook Scenes, it was time to move onto something else I wanted to do … thus began 2015: the year of the dragon. Yes … I made over 70 dragons in 2015 alone, many of which have new homes across the globe. [Adopt a dragon here]

I loved and enjoyed making dragons so much that I decided to do another year of dragon making (supplemented with a few other things, like my faces). Well … we’re not even halfway through the 2016 Polymer Clay Challenge and already I am tired of making dragons. After a nice chat with my friend Christi last week [read the article here], she told me to stop doing what isn’t bringing me joy. And you know what, she’s right! I’ve been struggling to make dragons, because they just aren’t filling my creative need right now. That doesn’t mean there won’t be more later, it just means for now, it’s time to move on.

One of the things that I was making as a monthly goal was to sculpt one polymer clay face per month. Faces have long been on my polymer clay “bucket list.” [More about that later…] I like to challenge myself to do something I want to grow in, establish in my skill set, and perfect to my own “uniqueness.” As you can see, I started out with a “bang” and didn’t create just ONE face, but rather 3 faces. Well … the love affair with finding my own design, making my faces my own [my faces are heavily influenced by Dawn Schiller and Maureen Carlson] and expressing my voice through them, I am slowing learning what I like and what I don’t like (when it comes to making faces that is).

So why change ideas mid-stream this year? For ALL the above reasons … I’m plain and simply tired of making dragons. Will there be more, yes … but not right now. I decided to continue my current love affair and fascination with polymer clay faces … weird, quirky, unforgettable, and yet distinctly my own. I am learning and developing new techniques along the way too. Will I share some of them … maybe, but maybe not … that remains to be seen at this point.

This week in the 2016 Polymer Clay Challenge brought two new faces into my world. Farris, the droopy jowled elf on Yonder Wood and Quark, Senior Advisory to the elf lord of Yonder Wood. For each face this week, I took a few “in process” shots to show their work in progress and a few of the steps, showing their transition from ball of clay into elf.

Farris is the drooped jowled elf of Yonder Wood. He was quite the tricky fellow because he kept wanting to be something different along the way. Finally … I gave up and let him be what he wanted … an allergy prone elf of Yonder Wood.

. Quark nears the top of my list of some of my favorite faces ever. Quark is larger than many of my other heads … how that happened?! Well … I let the clay tell me what to do and this guy wanted presence! So … he got what he wanted!

Don’t forget to add #2016PCChallenge to all your social media & blog posts.

2 thoughts on “Regrouping for the 2016 Polymer Clay Challenge”